With so much rainfall, trees are dominant and sometimes tree removal in the Comox Valley is necessary, although often a last resort. Whether its clearing, topping or cutting, tree removal is recommended when a tree becomes a danger to the surrounding environment or nearby structures due to damage, disease or death.

You may also be interested in: Hazard Tree Assessment & Removal

What is tree removal?

Tree removal, as the name implies, involves the complete elimination of a tree.

After a tree assessment, tree removal may be recommended in a number of cases: 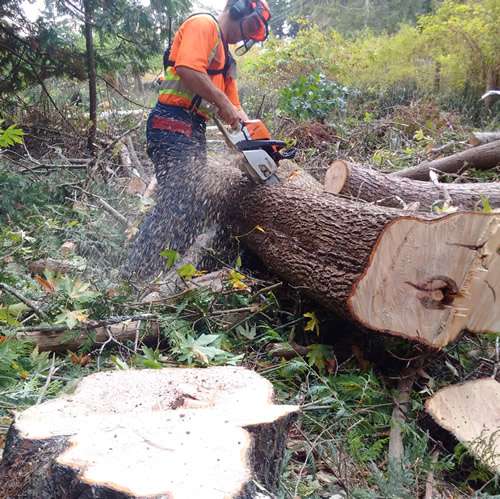 An example of tree removal in the Comox Valley

We were called to assist an apprentice utility arborist in removing a 120-foot dead fir in tight quarters.

What do we mean by tight quarters? Well there was a 25,000 volt BC Hydro line on the road, BC Hydro service to a house on the left of the tree and maples and firs in behind and to the right.

But it was a beautiful day for a big climb so after safely topping the tree, the arborist repelled back down until his friction hitch was stopped by the stopper knot, which is a knot tied at the end of a climbing line to prevent the tail of the line from passing through the friction hitch.

The arborist was then forced to use his flip line to relieve tension on the climbing line to untie the bound knots. If it were not for the stopper knot tied in the tail of the climbing line, he would have fallen approximately 20 feet to the ground.

Always tie a stopper knot at the end of a climbing line! Safety first!

Once the aerial worker was finished, the ground worker began moving the stacked and piled branch debris to the chipper.

Do you want to learn more about our professional tree removal services?

Contact us today with your questions, or to request a free site assessment or estimate.